Showing posts from November, 2010
Show all

November 22, 2010
Yes, the recent NKOTB sighting on the AMAs inspired my title for this blog but Cooper was really the one stealing the show last night!
For a few weeks Kevin and I have been encouraging Cooper to try to take a few independent steps. He responds by giggling and attempting to run in between the two of us, which results in a quick catch by one of us to avoid a dozen falls on the face.
Of course, as we assumed it may play out, last night as we casually played in the living room Cooper suddenly decided that he could indeed walk and proceeded to do so from one chair to another. Without letting him know we had caught on to his new talent, Kevin went to the opposide side of the room and hid behind the couch. This of course got Cooper's attention and his little legs moving!

We've been having FUN! 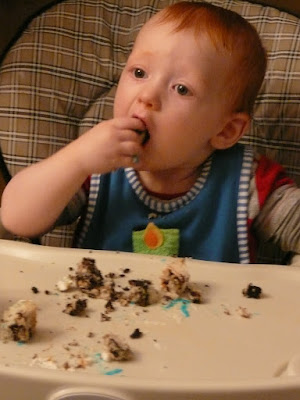 I was kindly reminded that it has almost been a month since my last blog posting. So here's an update:
Cooper turned ONE (!) and we have a big party to celebrate. Our house overflowed with family and friends, and food! We were once again reminded how fortunate we are to have such wonderful people in our life.
We had Cooper's one year well check- and got three shots- boo to that.
Cooper was 26 1/2 pounds and in the 95% for height and weight. Our little boy has "big paws" as one of Kevin's friends pointed out. It is noticeable to us when he is feeding himself and those "paws" are close to his cute little face.
He loves... Dance parties in his room with his disco ball "Running" (assisted) up and down our hallway Wrestling with daddy Throwing food on the floor to get our attention Going for walks Puppies Staying up LATE to party (we found this out recently at Uncle Brian and Auntie Joni's wedding where he slept one hour total all day and then stayed u…
Post a Comment
Read more
More posts

Jacquelyn Vranicar
The mother of two boys and wife to Mr Wonderful- Jacquelyn is striving to have it all. Come along for this adventure!